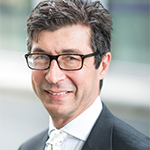 Ivan currently leads the efforts of a major bank to deliver breakthrough change in how it serves its customers, through digital, virtual and physical integration.  He has a life-long determination to combine analysis with cross-disciplinary innovation to make organisations and individuals improve their performance.

He started his career as a lawyer in the U.S Department of the Treasury and the European Bank for Reconstruction and Development.

Ivan’s background in strategy, finance and law has allowed him to lead transformations across many major organisations from American Express and to Laing O’Rourke and Barclays Bank. Previously, he was at McKinsey and Company.

Globe-trotting Ivan has 40 countries under his belt as well as three fluent languages and is conversational in several others putting the rest of us to shame.